skip to main | skip to sidebar

Having just read a New York Times food review for the Lake House restaurant in Bay Shore, NY, I feel giddy to be in possession of one of this renowned chef's recipes. All accounts say this guy is seriously good, and we came upon his recipe for ribollita in none other than the December 2008 Runner's World magazine. According to RW, chef Matt Connors is a nine-time marathoner with a 3:05 PR. The recipe is described as a pre-race favorite.

Ribolitta is a flavorful hearty Italian soup, generally containing lots of vegetables and beans. I say generally because it is traditionally made from leftovers, so who knows really what is used, not to mention ribollita means "reboiled" in Italian. This soup is best when cooked at least twice before serving. We always make it a day in advance of the planned meal. Tomorrow being Sunday, we're looking forward to an easy, late afternoon meal of ribollita, after a morning full of running. I dare say it has become a weekly food staple at our house.

Here's a pic of what I made this afternoon. 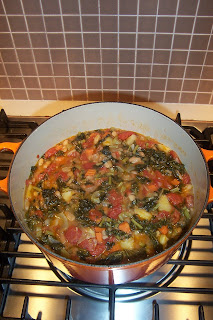 Following is the recipe as it appears in RW. It's easily adjusted to accommodate your tastes and preferences. We use vegetable stock, half the olive oil, a big can of chopped tomatoes, and might not add the bread. Quantities might vary slightly, but pretty much we follow it to the letter. Enjoy!

Mash one-cup cannellini beans in a bowl with the back of a fork until smooth. Set aside. Gently cook garlic, rosemary, onions, celery, carrot and kale in the olive oil for about 20 minutes in a heavy-bottomed soup pot, stirring occasionally. Add both mashed and whole cannellini beans, chicken stock, potato and tomatoes. Simmer gently for at least one hour. Add bread and simmer until it's completely dissolved into the soup. Taste. Adjust seasoning with salt and pepper. Serve (preferably the next day) drizzled with olive oil and Parmesan. Makes four generous servings.